What is Psychological Safety? 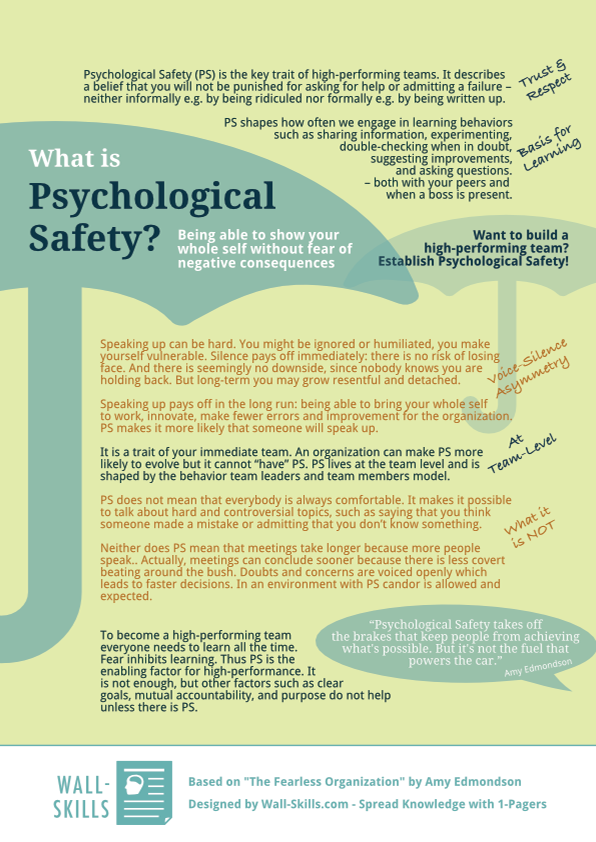 A few years ago, Google was trying to figure out the secret sauce that their high-performing teams have in common. Is it diversity, composition, educational background, …? Nothing correlated.

They couldn’t figure it out until they finally read research by Amy Edmondson and it finally started to make sense: The hidden connection was Psychological Safety. It is the basis for high performance. Ever since Google found this connection, Psychological Safety has been all the rage among people interested in organizational and team development.

Get a high-level overview with our 1-pager. (Oh, and there’s a sequel: How to build Psychological Safety.)

What is Psychological Safety?

Basis for Learning
PS shapes how often we engage in learning behaviors such as
sharing information,
experimenting,
double-checking when in doubt, suggesting improvements, and asking questions. – both with your peers and when a boss is present.

Voice-Silence-Asymmetry
Speaking up can be hard. You might be ignored or humiliated, you make yourself vulnerable. Silence pays off immediately: there is no risk of losing face. And there is seemingly no downside, since nobody knows you are holding back.
But long-term you may grow resentful and detached. Speaking up pays off in the long run: being able to bring your whole self to work, innovate, make fewer errors and improvement for the organization. PS makes it more likely that someone will speak up.

At Team-Level
It is a trait of your immediate team. An organization can make PS more likely to evolve but it cannot “have” PS. PS lives at the team level and is shaped by the behavior team leaders and team members model.

What PS is NOT
PS does not mean that everybody is always comfortable. It makes it possible to talk about hard and controversial topics, such as saying that you think someone made a mistake or admitting that you don’t know something.

Neither does PS mean that meetings take longer because more people speak.. Actually, meetings can conclude sooner because there is less covert beating around the bush. Doubts and concerns are voiced openly which leads to faster decisions. In an environment with PS candor is allowed and expected.

“Psychological Safety takes off the brakes that keep people from achieving what’s possible. But it’s not the fuel that powers the car.” – Amy Edmonson

To become a high-performing team  everyone needs to learn all the time.  Fear inhibits learning. Thus PS is the  enabling factor for high-performance. It  is not enough, but other factors such as clear  goals, mutual accountability, and purpose do not help  unless there is PS.